You are invited to the AGM for 2020. It will be held at the Millennium Trail Gazebo. You can also register to participate in the meeting by using ZOOM @ https://7hills-agm.eventbrite.com

The Covid-19 virus is changing the way we lead our daily lives.
The 7 Hills Community Pantry is no exception.

We will continue to provide food for our clients and anyone else within the community who is struggling at this time.

We have, however, needed to change how we operate in order to provide this service. This decision was made to protect our clients & volunteers, and to prevent the transmission of this virus throughout our community. We are asking our clients to call 705-924-2077 and leave a message prior to Friday, specifying what items they may require, as well as a phone number where we can reach them in order to schedule a time for their pick up on Friday between 11:15 and 12:30.

We understand that there are some clients who do not have phones, so we will provide them with what they need when they come to the food bank on Fridays no matter what.

The community, once again, has offered their help. We will post which items are required on our Facebook page as our shelves are depleted.

We thank you for your help & understanding.  We all have to do what we can to contain this virus.

We are grateful for all the support of donations that we have received from the community throughout the year. We are so fortunate that we live in a caring and giving community.

Our food bank is entirely volunteer run and receives no government funding.

We depend on your donations to help us provide food for many individuals and their families. More people are having to turn to our food bank to help them out, and it is important to us that we are there to give them the support that they need.

7Hills Community Pantry is open each Friday from 11-12:30 at the lower level of the United Church 60 Main St.

We will be receiving food donations along the parade route of the Santa Claus parade, thanks to the help form the Warkworth Guiding, who will be collecting items. We are currently running low on tuna, peanut butter, juice, chunky soup, instant coffee, Kleenex, shampoo and conditioner.

Look for us at the Magic Under Stars on Friday Dec 13th and 20th and you can also find donation boxes in Warkworth Pharmacy, Scott’s Variety and The Bakery.

If you are able to support us, donations can be dropped off at the food bank on Fridays, cheques can be mailed to PO Box 415 or through canadahelps. A Tax receipt can be given for you donations over $20. Please provide an email address to send your tax receipt.

We Thank You for thinking of us at this time of year and wish all of you a Healthy and Happy Holiday Season. 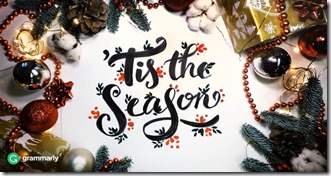 to be Jolly,  for Happiness and Giving, don’t let it be the season of empty cupboards and a cold house.
Help the 7 Hills Community Pantry provide those in need with food and cheer during the cold winter months.

We will also be at “Magic Under Stars” in Warkworth on Friday December 13th and the 20th to receive you donations.

You can also find Donation boxes at the “Warkworth Pharmacy”, “Scott’s Variety” and “The Bakery”

You can also donate money using Canada Help. A tax receipt will be send to you for donations of $20 or more, if you’re able to provide an email address.

We Thank You for thinking of us at this time of year, and wish all of you a Happy Holiday Season a Merry Christmas and a Happy, Healthy and Prosperous New Year.

You are invited to attend our Annual General Meeting at Mill Creek Manor on Thursday September 19, 2019 at 1pm

We hope to be near the Mews on Main Street during the “Magic under the Stars” event where we will be happy to receive your donations.

Currently we need the following items:

and personal care items such as:

We’ll also be glad to accept any financial donations, they will help us buy items that we need on a weekly basis such bread, milk, eggs and meat.
You can also Donate on-line by going to Canada Helps .

Have a Happy Holiday Season and a Prosperous and Healthy New Year.

Let me introduce to you Eliot, he’s is 8 years old from Warkworth.

Eliot asked everybody that attended to celebrate his birthday party to bring food for the 7 Hills Community Pantry, Warkworth Foodbank. 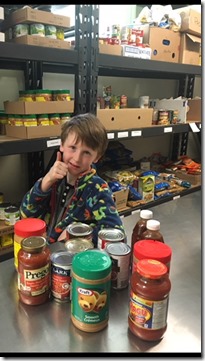 A big thank you to all of you!!!
For helping us help those in need over the Holiday season.

Because of you we were able to hand-out 25 Christmas Hampers that included a Turkey and all the stuffing’s.
With the help of the Giving Tree, Warkworth Pharmacy and the Secret Santa we handed out Christmas Gifts to 17 children.

Thanks to the church communities for all your donations.
Thanks to the WBA and merchants of Warkworth for their generosity.
Thanks to our neighbours and friends for dropping off clothing and toys.
Thanks to the gentleman who told his family “I don’t need anything. Donate to the food bank instead”
Thanks to the Warkworth Community Service Club.
Thanks to everyone who donated food and turkeys to our food drive, money to our fundraising campaign and to our volunteers who sorted, packed and distributed it all in time for Christmas.

We truly are blessed with a thoughtful and caring community.

And as always on the web at Canada Helps

Thanks for your support and have a happy holiday season and healthy new year.

Demand for food assistance remains constant at 7 Hills Community Pantry — but so is the help it receives to keep going. 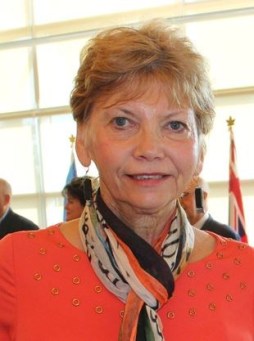 We couldn’t do it without the community support.”

That support comes in many forms, such as a young girl and a woman asking for donations to the food bank rather than be given gifts on their birthdays.

Percy Centennial Public School does a food drive around Christmas and the Girl Guides collect food during the Santa Claus Parade.

“The community is wonderful to us.”

That support is crucial as 7 Hills works with a budget of just $21,000 that’s made up mostly of donations, with a few small grants tossed in.

Each year on average, 7 Hills supplies food to 47 households, which range from single people to large families and includes seniors. Altogether, 80-some people make use of the food bank, which is open every Friday, from 11 a.m. to 12:30 p.m. at St. Paul’s United Church.

Clients in Warkworth and surrounding area receive a large supply of food once a month, but “many people do come every two weeks,” Lee said. “If they’re really strapped, we provide them with milk, bread, meat and eggs, every week or every two weeks.”

She began volunteering at the food bank three years ago after retiring as case manager at the Community Care Access Centre in Campbellford in 2012.

This is her second year as chair, having taken over from Gail Covert, who had served in that role for nine years.

“We had a very good year,” said Lee, who presided over the food bank’s annual general meeting recently.

In the last 12 months, 7 Hills received donations of sides of beef from the Northumberland Cattlemen’s Association and Hamilton Township Mutual Insurance Company, “which helped us immensely,” Lee said.

It also received a $600 Capacity Boost grant from Walmart for the purchase of a stainless steel table.

7 Hills had held two new fundraisers and both were “very, very successful.”

The food bank looked after clothing sales at the Warkworth Community Service Club’s annual Donnybrook Sale and made “over $1,000,” Lee said.

More recently, Sharpe’s Food Market and Northumberland OPP joined forces to hold a Cram the Cruiser event on behalf of 7 Hills for the first time.

“We collected 135 bags (of groceries), which really helped,” Lee said, because Food 4 All, Northumberland County’s nonprofit centralized food distribution warehouse located in Cobourg, “is going to discontinue stocking some of the items that we need,” such as Kraft dinner and canned pasta.

It figured we could get those through donations, Lee said. “They’re going to substitute vegetables and fruits. People are asking for more of that.”

Northumberland United Way again provided backpacks filled with school supplies for children in families who use the food bank.

“At Christmas time, we try to make sure that we’ve got toys,” Lee said.

Copied from article in the Independent newspaper written by John Campbell